A tearful chorus of Broadway luminaries and fans congregated on the iconic red steps of Duffy Square this Sunday to pay their respects to Stephen Sondheim with a rendition of "Sunday" from his Pulitzer-Prize-winning Sunday in the Park with George. Among the Times Square chorus were the likes of Lin-Manuel Miranda, Raúl Esparza, Laura Benanti, Brian Stokes Mitchell, Josh Groban, Lonny Price, Sara Bareilles, Marc Shaiman, and Tom Kitt.

As Variety reported, "Sunday" is "as close to religious communion as anything in the Broadway canon". "At his passing, the song offered a bittersweet tribute to the lasting artistic contributions and uncompromising devotion of Broadway's greatest composer."

The Variety video can be seen here:

In October last year, Bernadette Peters led an all-star rendition of "Sunday" at the same spot at the north end of Times Square, to launch the NYC Next initiative. “I look at this song as being about our community,” said Broadway Inspirational Voices founder Michael McElroy, who co-organized and arranged the chorus. “In this moment, we’ve had so much loss: loss of life, of employment. But we also have a moment right now that those lives cannot be in vain. We can start to rebuild the kind of theatre community and arts community that we want to see—that’s more inclusive from the executive boardrooms to the producing offices to the casting offices to the creative teams to the stories we tell to who gets to tell those stories. This song, for me, really speaks to that moment when we get to come back together, whenever that is, in a new way.” 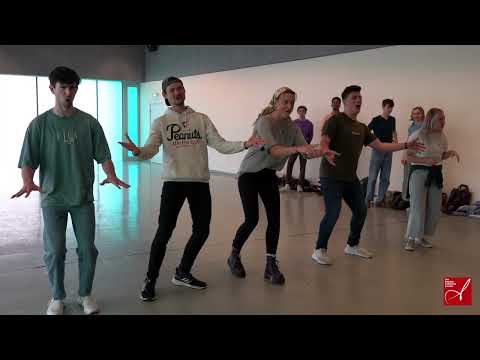 "Back in Business" - rehearsal video for SSSSPOTY 2022